Valencia and the Gay Games: the perfect setting to advocate for the fight against LGBTQphobia 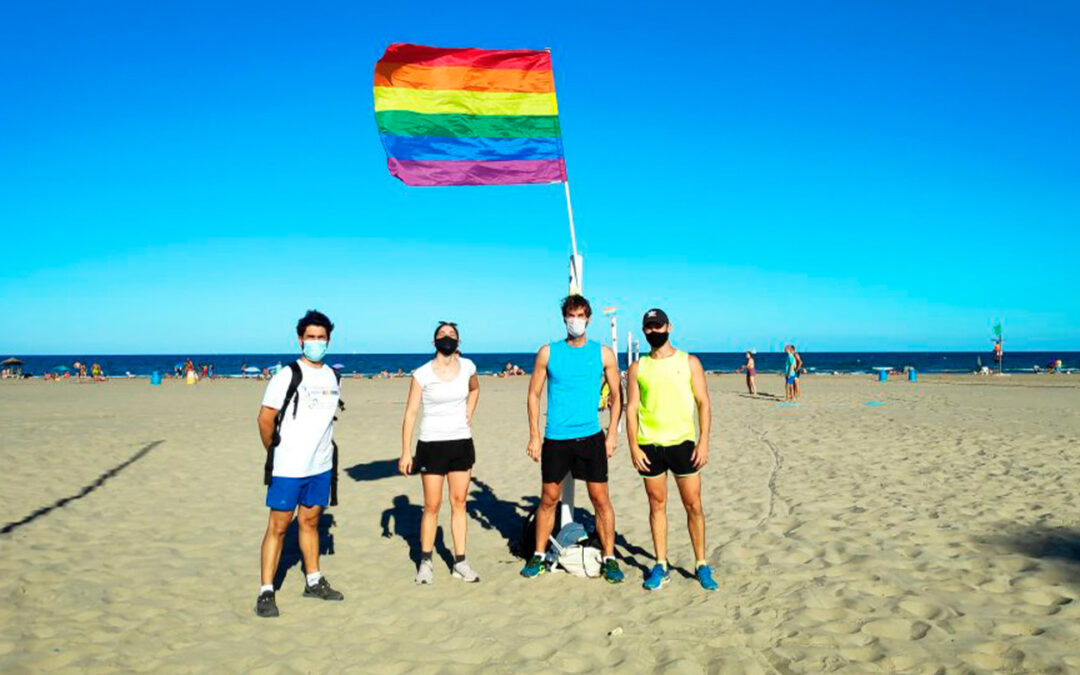 19th February was the International Day against LGBTQphobia in Sports, and seizing the opportunity, the Valencia Council announced its application to host the XII Edition of the Gay Games in 2026, an international, cultural and multi-sport event that is held every four years and highlights LGBTQ+ people in sport.

We talked to the representatives from the LGBTQ+ sports clubs in València, Samarucs and Dracs, which have classified this application as an “unprecedented opportunity” to work with federations and institutions and to create a new equal sporting framework “where there is no room for chauvinism or LGBTQphobia”.

The activism spokesperson at Samarucs, Jesús Gutiérrez, together with the other members, agree that the event will bring a new approach for watching sport nationally, both for the collective and for federations. “The legacy of the Gay Games is leave behind a very positive change in the way that society thinks about the LGBTQ+ collective”.

“If València becomes the host, it would be the second most important event in the Valencian region after the America’s Cup”

Besides the sociocultural onus it involves, in terms of visibility, it entails some much-needed media coverage for the collective. And economically speaking, it would have an impact of 160 million euros on the city, besides the jobs it would create. “If València becomes the host, it would be the second most important event in the Valencian region after the America’s Cup”

The leaders in sports integration

Both Dracs and Samarucs are LGBTQ+ sports clubs that fight for and safeguard the organisation of sports activities promoting integration. Samarucs was founded 18 years ago, and they are proud to say that they generate safe spaces so that everybody is able to do the sport they love. It began with a group of friends that swam together and nowadays boasts 11 sports at all levels, amateurs and federated. “There are more and more members and at the same time a growing number of disciplines”, the state.

“We use sport as a tool to free sporting spaces from chauvinism, LGBTQphobia and discrimination against people with HIV/AIDS”.

Dracs was established in November 2019 with the aim of bringing committed and modern activism to the Valencia region. Its president, Mikel Ayensa, tells us that one of its main tasks is to provide support to people, clubs and federations in the event they need guidance, help or if there is any type of discrimination. “We use sport as a tool to free sporting spaces from chauvinism, LGBTQphobia and discrimination against people with HIV/AIDS”.

It is difficult for them to open up to new sports and become federated due to both the pandemic and the fact they do not have any type of sponsorship, but they are on the way to gaining traction in the sporting sector. Unfortunately, in our society there is still discrimination. “We have seen a dangerous increase in hate speech and the rejection of those in the collective, especially against trans people”, Mikel tells us.

“These attacks show that we have not made enough progress in society or in sport, and we do not have a sporting model that has broken away from chauvinism or LGBTQphobia”, he adds.

At Samarucs they also tell us that they have received messages on social media on several occasions with hate crime. LGBTQphobia still exists, and these clubs are essential for providing awareness and helping us to be a fair and more equal society. Both Dracs and Samarucs agree that the situation is improving, but very slowly. “There is still a lot to do”.

Samarucs not only provides sport to its members, but it also helps them to interact amongst themselves, and so overcoming obstacles such as shyness, stereotypes and taboos. Education is key to promoting equality and human rights in sport too. “At Samarucs we are committed to education as a strategy for social transformation. In the next few months, we will start to give training sessions to clubs and federations, and we will offer them tools to create safer spaces where diversity can be celebrated”.

Dracs works with different councils and sports facilities in the region, implementing programmes to free sporting spaces from chauvinism. “The best step is prevention. To do this, there needs to be awareness campaigns, training, information and visible role models”, Mikel states.

A law in favour of equality

In the Valencia region, all victims of discrimination or an aggression due to their gender identity or sexual or affectional orientation, have an LGBTQ+ help service called “Orienta” which belongs to the Valencian Local Government. These services are not available in other autonomous regions without a law on equality. For this reason, it is so important to have a law that will protect and safeguard those subjected to these attacks.

In sport there was a call to reform Law 19/2007 against violence, racism, xenophobia and intolerance to include LGBTQphobia, but it is currently as a standstill. Both the activism members from Samarucs and Mikel Ayensa from Dracs acknowledge and commend the importance of the new Trans Law that is currently being discussed by the government.

This law would allow the athlete to compete depending on how their own gender determination, which would help to curb discrimination. We must remember that currently each autonomous region applies its own criteria, meaning that it is therefore necessary to have a law with equal effects for the whole country.

Samarucs has trans people that take part in recreational sporting activities with them, but it is often difficult to see something similar in high-performance sport due to the barriers put in their way. “The sporting structure needs to adapt to trans people, and not the other way around. They are people that have suffered and still suffer from different types of violence. Sport should not be one of them”, say those at Samarucs.

Mikel from Dracs highlights that the main mission of clubs and federations is to encourage everybody to have the chance to access and do sport, not only to focus on elite sport. Indeed, in elite sports is where there are less cases of sports people that reveal their sexual or affectional orientation. Samarucs, like Dracs, believes that the fact that it hits the headlines when an elite sports person comes out of the closet is positive, as it helps to provide visibility. “What we don’t see doesn’t exist, and what doesn’t exist doesn’t have any rights”.

Therefore, role models are important, because thanks to them, interest and impacts can be generated. At Samarucs they are sure, “We all live in a society that is not fully open to diversity, and so information of this type would help to provide visibility to other sports people and to start to create a safe and model space where they are not news bait”.